Listen the article in English 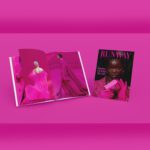 PINK or ROSE, color that RUNWAY MAGAZINE ® particularly fancies. Our company identity – our company’s logo is identified by ROSE.

ROSE is the only case where the washed white color does not have the same name as its dominant shade. We don’t say “pale red”, but ROSE.

We translate on English “PINK” instead of ROSE, but these terms have different history, and different chromatic extent of the origin.
In the XVIIth Century, PINK is a term for dyeing, designating a pigment made by associating an organic dye, generally drawn from a plant, with non-organic fixative. This definition corresponds to the French pigment lacquer. In the Color Index, which has no pink category, the trade names PINK and ROSE are found either with red or with purple.

In the XIIIth and XIVth centuries, in the works of Cimabue and Duccio, the infant Jesus was sometimes represented dressed in pink, a color associated with the body of Christ.

In the Middle Ages, the ROSE was the symbol of virility of men.
WHY? BLUE, divine color of the Virgin Mary, is associated with girls while ROSE, color considered as a pale virile red, is the prerogative of boys in Middle ages.

The most known portrait of king Henry IV dressed like Mars by Jacob Bunel dated 1605, who’s embodies the Roman god of war by wearing a pink tunic.

The golden age of the color PINK was the Rococo period (1720-1777) in the XVIIIth century, when pastel colors became very fashionable in all courts of Europe.

The ROSE was particularly supported by Madame de Pompadour (1721-1764), the mistress of King Louis XV of France, who wore combinations of pale blue and pink, and had a particular shade of pink made for her by the porcelain manufacturer from Sèvres.

ROSE will appear at different times as an accompaniment to colors.

In the 1950s, American youth created the concept of “tribes” which had their codes, their colors.
The most known the “preppies”, known by wearing sweaters, loose pink skirts, cozy sweaters.
Young girls wear ROSE.

In 1952 Eastman Kodak introduced 35mm color film to the cinema. The public loves and prefers the Technicolor process. The colors are less exaggerated and more pearly. This technique opened the way to stars such as Audrey Hepburn and ROSE!

In the field of fashion, the ROSE made its entry in force with Christian Dior in particular with its first collection “Corolle” in 1947.

Christian Dior, in addition to being known for innovations in the manufacture of women’s clothing, was also the first designer who invited to introduce his fashion pink collection to public Helen Williams, the first African-American model.

Without Helen Williams’s superb journey and courage, Naomi Campbell, Tyra Banks, Duckie Thot and many other African American models would not exist.

Christian Dior noticed her beauty and decided that only her elegance can present his revolutionary pink collection. That was a beginning for Helen Williams of her career as a “Fashion” model. Many ignore this fact and impact of Christian Dior on diversity and inclusion in the fashion industry.

In fact only in XXth century ROSE became established color for women. And BLUE became color for men.

The greatest female icons of the 1950s and 1960s contributed in this new “women’s” PINK trend.

We should notice remarkable Haute Couture collections of this time, like collections of Italian designer Elsa Schiaparelli (1890-1973), a pioneer in the creation of the new wave of roses, aligned herself with the artists of the surrealist movement like Jean Cocteau. In 1931 she created a new variety of color, called Shocking ROSE, made by mixing magenta with a small amount of white. She launched a perfume called “Shocking”, sold in a woman’s torso bottle, which was allegedly modeled after Mae West’s.

The creation of the Barbie doll contributed to the popularity and the feminine brand of ROSE indirectly.

PINK color represents charm, sensitivity, tenderness, sweetness. This color is associated with childhood, femininity, delicacy and romanticism. Whether candy pink, pale pink, or fuchsia, ROSE is a dynamic color with a touch of delicacy. ROSE is also associated with tenderness and happiness. Everyone knows this expression “la vie en ROSE”. Let’s not forget that the ROSE is ambivalent.

Combination of ROSE with WHITE creates the symbol of chastity and innocence.

But the combination with VIOLET or BLACK symbolizes with eroticism and seduction.

For men ROSE can be a color of communication with an ambiguity which rises a question about an identity, appearance and gender. The origin of this meaning of ROSE started in 1930-40s in Nazi Germany. Nazi concentration camp prisoners accused of homosexuality were forced to wear a PINK triangle. For this reason the ROSE triangle has become a symbol of the modern gay rights movement.

Early as 1837, Frederic Portal described ROSE as a color in its own right and devoted a chapter to it in his famous book “Symbolic colors”.

ROSE is the only shade that has the color designation with a chromatic field that brings together a wide palette of red “washed” with white and very difficult to measure, to limit with other colors.

ROSE is a key player in printing.

ROSE is the color that has the most nuances often split in the families of shades of red and purple.

AFNOR X 08-010 Methodical Color Classification defines ROSE as a desaturated color with medium clarity, the dominant wavelength of which is between 588 nm (orange) to −499 nm (red-purple), or −508 nm (purple-red) if it is more washed with white.

The keyword MistyRose (foggy pink) calls, in HTML applications, the computer code color # FFE4E1. This color is effectively, according to the criteria of AFNOR X08-010, a ROSE.
In 1905, the Color Directory of the Society of Chrysanthemums transmitted a list of color names which correspond to shades of ROSE with foreign equivalents:

The Directory also indicates that Bourgeois extra pink lacquer corresponds to Cochineal Carmine, and that Lefranc Rose atlas corresponds to the color of madder lacquer or to Safflower Rose or Caroline Rose, that fuchsin is also sold as “Fuchsin rose, fuchsin red, aniline rose” 11.

ROSE does not appear in the visible spectrum.

WHY ?
To answer this question we must keep in mind that color perception is a “psycho-physical” phenomenon. In nature, “colors” do not exist. What exists is light, which is an electromagnetic wave, and it can contain all imaginable wavelengths. It’s the brain that makes things so beautiful.

In 1931 the International Electricity Company carried out experiments to normalize this perception. It showed that for an average person any color of visible light could be considered as a mixture of three fundamental colors: Red, Green, Blue (which moreover will give rise to the development of color TV screens, ancestor of our monitors each color is recomposed from red, green and blue pixels).

This experience has been described in the diagram below, where all the traditional colors are represented on a two-dimensional diagram. In reality there is a third not shown which is the “brightness” dimension, we can add black and thus obtain all the visible colors, such as brown or gray for example.

The edge of this rounded triangle corresponds to the spectrum of visible light, from 380 nm to 780 nm. We find that there are an infinity of colors which are not in the spectrum but are a mixture. This is the case with pink, which is a mixture of red and indigo. To make ROSE appear we need at least a combination of two wavelengths according to well chosen intensities, for example 480 nm and 620 nm, but there are endless recipes at two or more lengths waves to get the same ROSE.

It has also been shown that the human brain retreats the nerve impulses received from the RED, GREEN and BLUE cones to enhance the complementary colors. That is to say the colors which by mixing give white, like Magenta in particular. The brain is particularly sensitive to complementary colors. The color ROSE which is a variant of magenta, therefore occupies a “perceptual space” in our mind. Finally it is normal that ROSE is its own term.

Conclusion on the ROSE

By wearing it, by using it … the ROSE accompanies you in your story and suggests delicacy, sweetness, romance … The ROSE will be yours as long as you give it with its added values.
You will give it a small name and you will like it.