Matty Bovan Fall-Winter 2018-19 collection presented during fashion week in London.  In his first solo show, Matty Bovan reveals more of the unique world that he has been building in the two years since he arrived on the London Fashion Week schedule. This is a self-contained realm beyond our own time where the primitive meets the unearthly – as if artifacts left by a lost stone-age civilization from the future have been sifted from the soil by off-world archaeologists.

The initial direction for the collection came to the designer when he was in a car looking out across the North Yorkshire Moors at dusk, stretching out around him for miles. The feelings of romance and isolation that they stirred run throughout the collection, most obviously in its earthy brown and twilight violet colours. 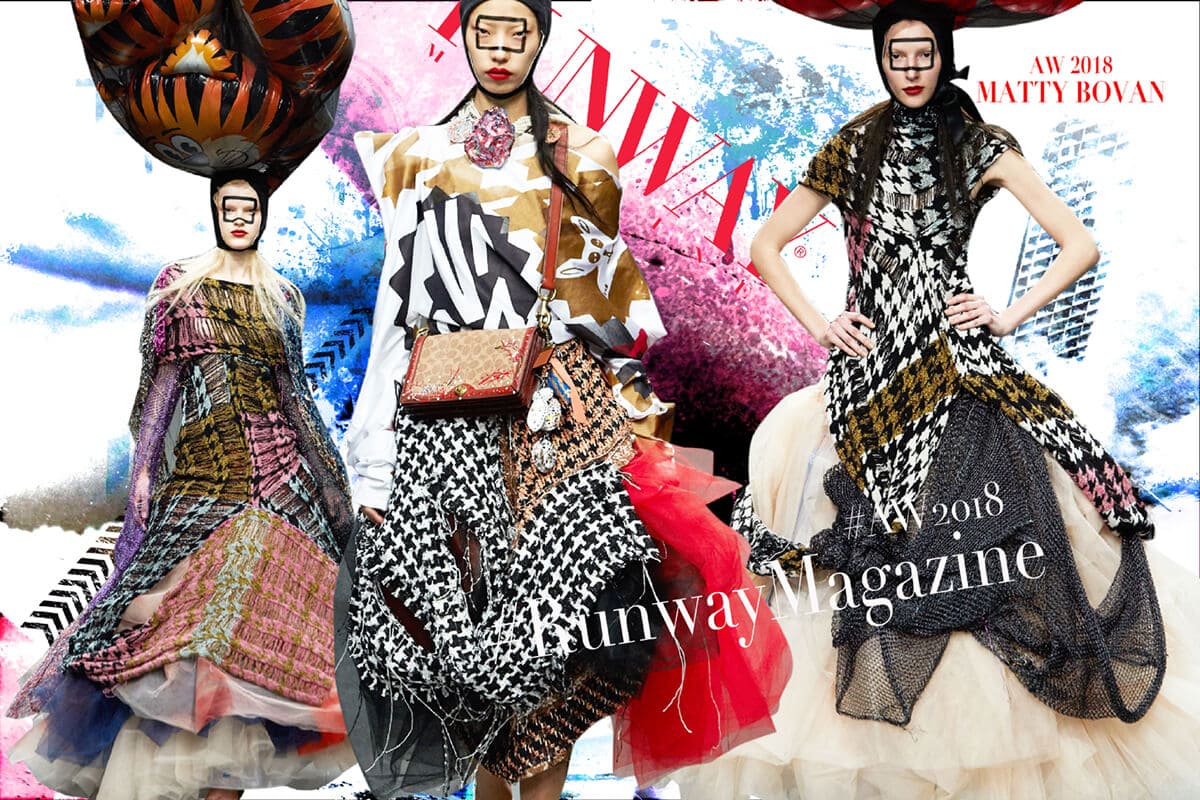 Further influence came from Matty’s late grandmother, whose wardrobe of tweed suits directly inspired both the shapes and textiles of the collection. Hound’s-tooth check is everywhere, sometimes as a print but mostly woven, occasionally at such an enlarged scale that it starts to morph into something else entirely. The texture of these specially made tweeds is exaggerated with chunky yarns which feature throughout the collection supplied by show sponsors Wool and the Gang, and is further disrupted by contrasting elements woven into the mix. The edges are left ragged – the designer’s distinctively post-apocalyptic take on a previously prim and proper fabric.

The sense of richness invoked by these robust tweeds, is further enhanced by taffetas, velours and teddy bear furs, albeit in an off-kilter way: the fake furs decorated with black paint recall not only mink but roadkill on a remote country lane. The rigid grid of the tweed is contrasted by bleached denim, where organic splashes suggest night-time skies filled with galaxies and the Northern Lights.

Familiar Matty Bovan signatures return: square shoulders, fin-shaped backs and rectilinear necklines; a liberal use of net-like crochet; perplexing combinations of rough and smooth textures, of earthy and luminous colours. But in a departure from his previous silhouette, built from long, tall rectangles, this season’s waists are cinched, following the line of his grandmother’s tweed jackets, and hips are amplified using strap-on panniers, jodhpur curves on tailored trousers, and layered skirts stuffed with tulle.

The feature print of the season, which also appears on the show invitation, looks like a NASA image of the surface of Mars but is in fact taken from a photograph of mud at the end of the road where Matty lives in York. Elsewhere, bold geometric prints recall the carpets of the eerie, isolated Overlook Hotel in The Shining.

For the necklaces, strings of pearls – some from the collection of Matty’s grandmother – are combined with blank plastic luggage tags and clay faces – handmade as ever by Matty’s mum – that recall medieval gargoyles and Palaeolithic cave paintings. The pearls also feature as customised elements on Coach handbags, featuring the luxury design house’s signature ‘C’ pattern.

The headpieces have been specially made for Matty by Stephen Jones using balloons wrapped in tulle, stitched to balaclavas that recall the practical winter wear required for sunset walks along the chilly moors.

The high-heeled shoes and boots are made by Gina, mixing neutral tones with bright colours, using holographic materials and even Matty’s custom tweeds.

‘In previous seasons, as the day of the show has approached, I’ve looked at the collection and tried to pull it back from the extremes that I tend to go to.’ Matty comments. ‘But this time I haven’t held back at all.’ 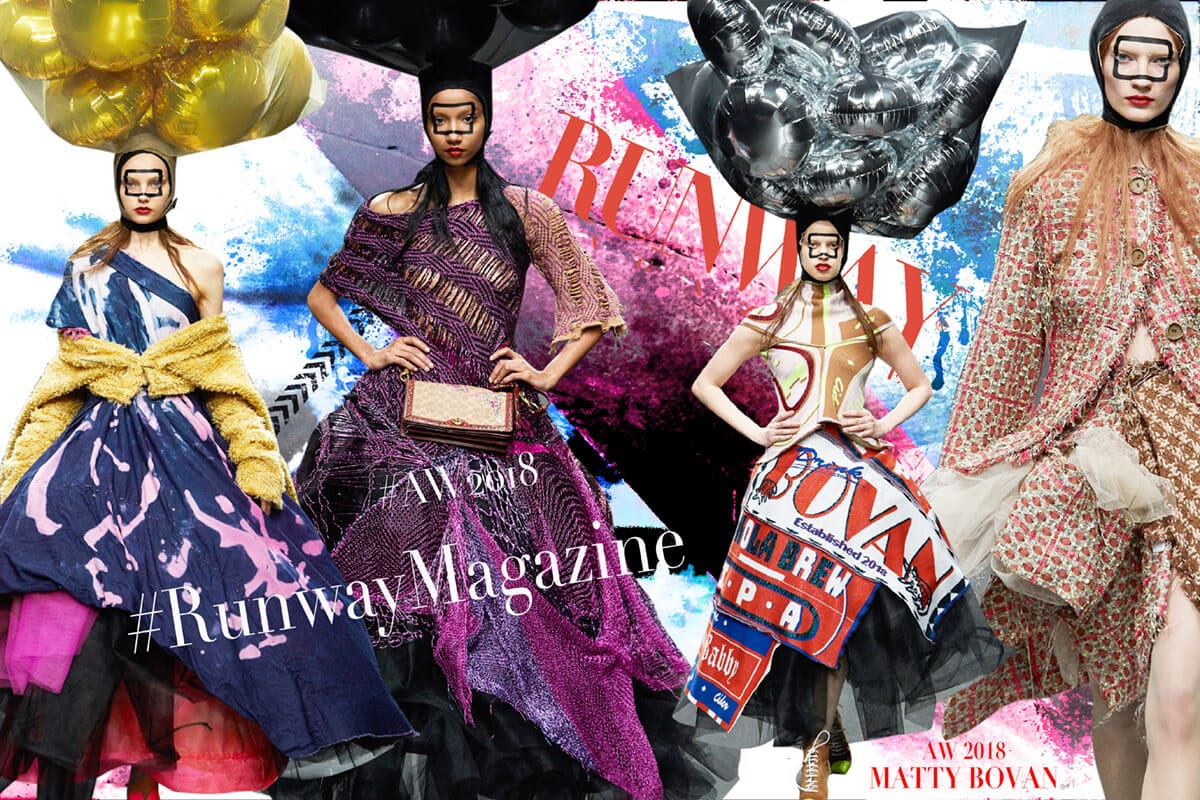